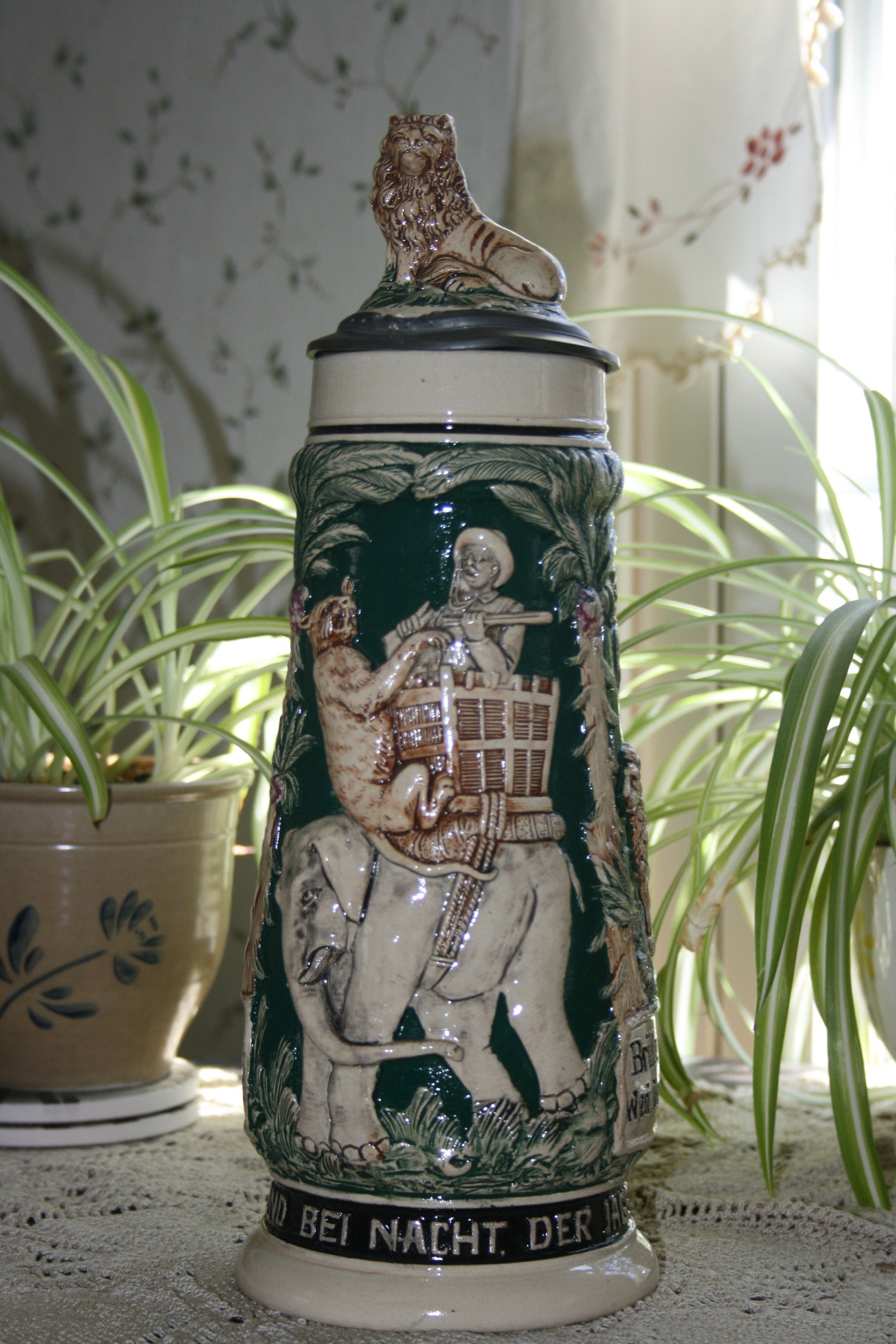 This  lovely stein came from a wonderful estate of a collector of unique  glass, barware and German steins.  A wonderfully produced piece  depicting the Smithsonian and National Geographic sponsored 1909 hunting  trip to Africa of President Roosevelt after the end of his second term!

In March 1909, shortly after the end of his second  term, Roosevelt left New York for a safari in Africa. The trip was  sponsored by the Smithsonian Institution and the National Geographic  Society and received worldwide media attention.

His party, which  included scientists from the Smithsonian, killed or trapped over 11,397  specimens, from insects and moles to hippopotamuses and elephants. 512  of the animals were big game animals, of which 262 were consumed by the  expedition. This included six white rhinos. Tons of salted animals and  their skins were shipped to Washington; the number of animals was so  large, it took years to mount them.

The Smithsonian was able to  share many duplicate animals with other museums. Of the large number of  animals taken, Roosevelt said, “I can be condemned only if the existence  of the National Museum, the American Museum of Natural History, and all  similar zoological institutions are to be condemned.”

Although  based in the name of science, there was a large social element to the  safari. Interacting with many native peoples, local leaders, renowned  professional hunters, and land owning families made the safari much more  than a hunting excursion. Roosevelt wrote a detailed account of this  adventure; “African Game Trails” describes the excitement of the chase,  the people he met, and flora and fauna he collected in the name of  science.

All of that commemorated in a superb piece of artistry!   The wording on the stein (which is translated in a poetic rather than  literal sense) reads – around the bottom: “By day and by night, the  hunter is watches.”; under the male lion: “Roar is the lions roar when  the waiter forgets your beer to pour.”; under the lioness and cubs:  “Calm blood and clear eyes are necessary for hunting.”

Unique  design items are…..the volume is 1-1/2 liters, the handle is made up of a  lioness climbing tree branches, a regal lion finial, and the thumb  press is a wonderful aged pewter in a beautiful scroll leaf pattern –  which rests perfectly atop the head of the head of the lion on the  handle.

The bottom is stamped “Germany” and measurements are  approximately 13-1/4” tall (to the top of the lion head finial), 4-3/4”  across the base, 6-1/4” in width (handle arch across), 3-1/8” across the  mouth and has an inside depth of about 10”.  With an age of  approximately 106 years old, there is surprising little wear!  The only  items of note are aging discoloration on the pewter and a minor dent to  the ring around the finial – which cause NO damage to the ceramic!

Other than noted there are no cracks, chips, or repairs. NOTE:  This piece is heavy – weighing close to 4 pounds!